I discovered mukbang culture by accident while looking for fruit.

A few years ago, I was curious about fruitarianism. My browsing led me to a fit, vibrant, vegan lady who ate only fruit 90% of the time.

She bubbled over with positive vibes as she spread her fruity gospel.  A hardcore athlete and distance cycling enthusiast, she showed no signs of low energy from her diet.

Gleefully, she devoured entire crates of mangoes or bananas in one sitting.  Her boyfriend was a fan of durian, an Asian delicacy and one of the foulest smelling things on the planet.  I was glad it wasn’t smell-o-vision.

I once saw her eat a family size box of boiled pasta, and it was the only time she strayed from fruit.  After adding a couple veggies, she ate it all on camera from a giant mixing bowl.

Triumphantly slurping up every last noodle, she stood to show fans how her taut belly had distended into a swollen, hard ball.

Social media is full of contenders: tiny fairy women with cat ears, gigantic lumbering men, gorging furries, extra-crunchy ASMR.  What I find amazing is that the skinny ones never seem to gain weight, despite eating like a teenage boy in a growth spurt.

One South Korean mukbanger on Twitch fills every inch of his tabletop with oily, overflowing takeout boxes.  His fans gear up for the hype;  his chat room is always off the hook.  Viewers who send Twitch bits (cash) tell him what to do, and he dutifully consumes with no limits.

Grease is the Word

Other mukbangers go to great lengths to deliver massive gross-outs by eating or mixing foods considered by most to be inedible.  Think of the TV show Bizarre Foods, but in mass quantities and without Andrew Zimmern.

Some proudly leave grease and food on their faces, shirts, and table. The visuals reach out and punch viewers with unabashed gluttony.

People seems to like the punches – the most outlandish eaters have millions of views and devoted followings.

Back to my first online mukbang.  This gal’s success in attracting vegan and health devotees was both improbable and impressive.

She called her followers “banana bitches” until a few fans complained, so then they became “fruit bats.”  Books, videos, and other paid media followed as she promoted her lifestyle and fruit-only prescription for health.

Backlash was inevitable as loyal “fruit bats” saw their health deteriorate.  Reports surfaced that the fruitarian wasn’t all she claimed- at least not to the juicy level she promoted.  Online scandals are ubiquitous, so there’s no telling if the allegations were true.

Why Do We Watch?

I will be the first to admit that I was initially fascinated by mukbang, but I was also confused.  How did I get sucked into this content that I know I’d deny watching if my gentlefolk knew?

Think about your last enjoyable dinner with someone you cared about, and then imagine viewers having that same feeling with their virtual community.   Eating together creates connections.  Some fans are happy to contribute to their streamer’s grocery bill to ensure the next show.

Unexpectedly, a subset of people with eating disorders are into mukbang.  Instead of eating, they get calorie-free satisfaction from watching someone else eat.  No guilt, no calories.

I’m not here to dog on viewers who enjoy “eating broadcasts” (the English translation of mukbang).  I watched several before I had my fill.

If you’re into the feeding scene, I’m also not here to kink shame you. Consenting adults should be able to do whatever they want, as long as they don’t hurt anyone else.

To be fair, many live mukbangers aren’t sensationalist gobblers.  Some are just gregarious gals and guys with a fan base who enjoy sharing their lives and meals with friends.

They make money and their fans are satisfied. It’s a mutual exchange where both get what they want.

Ready to mukbang?  Your options are as endless as the all-you-can eat buffet at Golden Corral.

No shame if this is your jam – millions around the globe share your interest.

Just make sure you clean your plate! 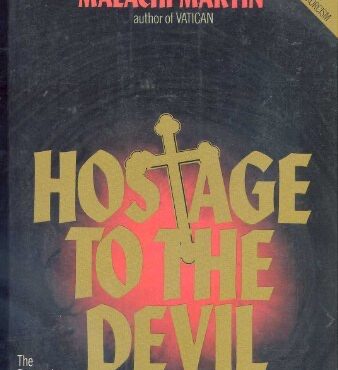 Father Malachi Martin was a spooky regular on Art Bell's late night radio show.  An author and former Jesuit priest,  he shared (according to him) true stories of demon possession and redemption that commanded rapt, breathless attention - and later, nightmares. Listeners were terrified, locking their doors and clutching rosaries or a crucifix. Many were convinced that they, too, were possessed and called in for help. One of Father Malachi’s […]